With a Polish mother, a Catalan father and Basque adoptive, Anna Riera Smolinska reflects many cultures but, above all, that of respect and care for the environment. Passionate about the sea and animals, she has a degree in Marine Biology, is an expert diver and even knows how to sail. That is why she fits perfectly into the team of Bodega Crusoe Treasure.

Why did you decide to study Marine Biology?

I have always loved the sea and animals. I chose Marine Biology in an attempt to get closer to the world of cetaceans, but during my studies I got to know Marine Ecology and was fascinated by it: the way the sea is connected to the land; how what happens in one place has repercussions in the other. When I had the opportunity I went to the south of Italy as an Erasmus student to study Biology and Marine Ecology. And when I finished my degree, I took an internship in the Azores and worked on whale watching, one of the best experiences of my life. It’s hard because you work five months a year thanks to the climate, but it’s beautiful. We saw sperm whales, common whales, common dolphins, painted dolphins, bottlenose dolphins…

Marine biology seeks the integral maintenance of all marine species and the improvement of their resources. Why is that so important?

Marine biology is a part of the general biology. Everything is linked. The fact that species disappear or that the sea is contaminated does not only affect the Ocean; it affects the Earth and humans. Some species that we think are unimportant may disappear and cause other species that we consume to cease to exist. It is a chain. It is like the “butterfly effect” of chaos theory, which says that “the flapping of a butterfly’s wings can cause a Tsunami on the other side of the world”.

“There should be natural climate change as part of evolution, but not brought because of us.” 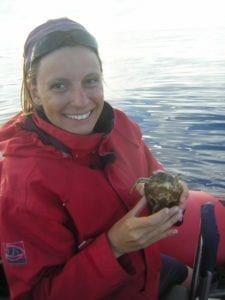 In that sense, what do you think of Global Warming and its consequences on the oceans? Can we do something about it?

We can do many things. We as humans cause changes that would occur in a very slow process, over millions of years, and we accelerate them tremendously. That doesn’t give species time to adapt. It is understood that there should be a natural climate change as part of evolution, but not one provoked by us. The first thing we have to do is be aware: review energy sources, consumption levels, plastic waste… We can all contribute with our grain of sand but, of course, it has to be a priority in the governments’ agenda.

The oceans cover 71% of the earth’s surface and it is estimated that only 5% of life in the oceans has been researched so far. Impressive.

The oceans are so deep that it was not possible until very recently to go down to certain depths. We know those species that are near the continents or at shallow depths. This has been made clear through the example of the giant squid. They were thought to be mythological beings until they were found in reality. Now we have more tools and therefore has been possible to access the Mariana Trench, the deepest place in the ocean at 11,034 meters below the sea. So the research is gradually being conducted.

As a marine biologist, what do you love most about Bodega Crusoe Treasure?

The change that has been taking place in our underwater cellar. When I first joined, it was just a start-up project. The theory was that the artificial reef modules would come to life. Now, eight years later, we see that it is so. It is full of species that live, reproduce, feed and protect themselves from predators in our artificial reef cellar. It’s very rewarding. Every year we find different species. This year, for example, we have found mako eggs, a protected species of shark. In addition, our reef cellar is a living laboratory that gives us endless opportunities to increase our knowledge and share it.

For being so important to us humans, Marine Biology is not very present in our lives…

It’s present, but not called Marine Biology. We treat it as environmental awareness, and fortunately it’s growing a lot in the last few years. Until now we were more focused on forests, but now more and more organizations are concerned with the marine issue. It’s the right thing to do because Marine Biology is very tightly connected. It would be very good to make species known… to bring it closer to basic education in schools. For some years one of our areas of work covered environmental awareness and we did activities with schools and noticed that in the educational programme it was hardly dealt with, nor in the offer of activities. In that sense we remain open and, in fact, we encourage schools to address it because it transmits many values. We also need to take it into account at work and value all the professional options that the sea and the oceans can offer.

Your Crusoe Treasure wines convince us by their oenological quality, but above all by the project behind

Every bottle of underwater wine sends out a message of conservation of the seas. Not only do we age the wines under the sea, but we also help enormously in the recovery of the marine area. In our case, in Plentzia, the area was very devastated due to fishing and the recovery is obvious. The fishermen have told us that around the micro-reserve the marine fauna has increased in quantity and size.

More of a personal dream. I like to keep learning, studying, discovering day by day the wonders of life in its entirety. Mother Nature is truly awesome. To be able to contribute to its conservation, doing my small part to help us move towards a more sustainable world.