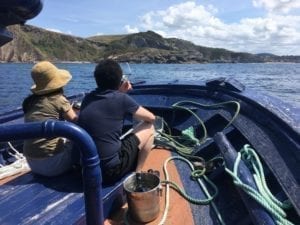 When you contact us to visit our underwater cellar or during your visit you always ask us what other activities can be done in the area or what kind of cellars you can find nearby.

In the region of Uribe, where the municipality of Plentzia and therefore our underwater wine cellar is located, we find a large number and quality of txakoli wine cellars.

Each of them is different in one way or another: for being family owned, for being bigger, innovative, traditional, etc. Even so, they all have something in common. They all have a passion for txakoli, for its great tradition in the Basque Country, for its effort to achieve the recognition of txakoli as one of the best wines in the world. 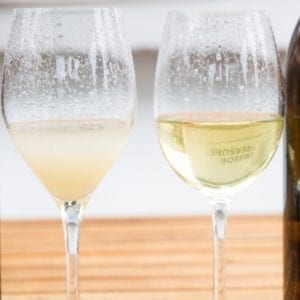 Denomination of origin of txakoli

Txakoli de Bizkaia covers the entire Biscayan geography and has 57 wineries under this designation of origin. This Txakoli stands out for its medium intensity and great aromatic complexity where white fruit notes predominate, together with floral, citrus and herbal notes. In the mouth, it has a slight acidity and a quite persistent sensation.

Txakoli de Getaria, on the other hand, is found throughout Gipuzkoa, although a large part of its production is concentrated in the municipalities of Getaria, Zarautz and Aya. It has a total of 32 wineries registered under this appellation. The wines differ in colour between pale yellow and greenish yellow. Very intense in the nose with touches of white fruit with slight notes of fresh grass. In the mouth, on the other hand, they are light wines with a touch of effervescence.

Finally, Txakoli de Álava is located in the Ayala region, where there are only six registered wineries. It is therefore the youngest and smallest appellation in the Basque Country. Its txakoli differs in colour from pale yellow to straw yellow. On the nose, they are aromatic wines with fruity hints. In the mouth, they are fresh, slightly acidic and with a somewhat bitter aftertaste. 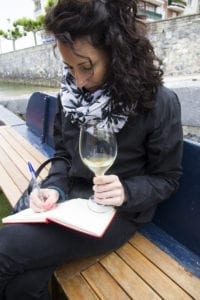 In addition, the origin of the word txakoli is also very interesting. According to some historians and etymologists the origin comes from “etxeko ain” (just enough for the house), an answer that was obtained when the producer was asked how much wine he had made. This word, which comes from a popular custom, evolved into “etxeko lan” and eventually became “txakolin“.

Among the main grape varieties, we find Hondarrabi zuri, the main coastal variety of the Basque Country, very aromatic and tasty. Hondarrabi Zuri Zerratia, which provides floral and vegetable aromas with slight notes of bitterness and Hondarrabi Beltza, for the production of red txakoli.

But if you want to discover more about its history and peculiarities, we encourage you to visit Txakolingune, the museum of txakoli located in Bakio. In the museum you will have the opportunity to know the characteristics and the process of elaboration of the txakoli, together with the history and evolution that this wine has experienced during the years. Without forgetting the work of the txakoli wineries, which, besides holding on to tradition, are increasingly committed to incorporating new technological advances into their production processes, achieving recognition and prestige with great effort and dedication.

Our underwater winery and the txakoli 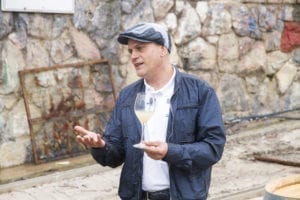 In our case, in our winery’s laboratory we have investigated with the txakoli, but when it is immersed it loses its denomination of origin and becomes a white wine. Even so, we have an research vineyard in Barrika, of Riesling and Sauvignon blanc, where we are constantly trying out different ways of making it. We are currently working on designing our km.0 wine with typical varietals of the area. 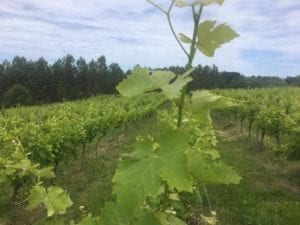 Here we present some of the most renowned wineries that produce this great native wine:

This family winery, which is rooted in the Txorierri Bizkaino area, specifically in Lezama, has more than 120 years of history. Founded in the 19th century, it has a total of 9 hectares located in an unbeatable setting. The winery has clay-loam soils on south-facing slopes and an integrated production system that allows them to produce healthy, ripe, golden grapes… The ideal starting point for supporting vines of native varieties and creating a good txakoli wine.

Its txakoli, winner of numerous national and international awards, combines the traditional typicity of this wine with the use of the most advanced techniques. Among his most recent awards, we find the Decanter Silver Award 2017, very well-known international Awards in the world of wine.

Located in Bakio, a town historically linked to Txakoli, this winery is protected by the Txakoli de Bizkaia Denomination of Origin.

The winery, despite not having a family tradition, is formed by Andoni, Egoitz, Itziar and Julen, who in a moment of massive abandonment of the vineyards in the area dared to convert a traditional farmhouse into the Doniene Gorrondona winery.

After the work of this young and well-prepared team, we find wines with a very marked personality. When making their wines, they prefer little-known and researched varieties combined with their main varieties, Hondarrabi Zuri and Hondarrabi Beltza. In addition, they always use new viticultural techniques. In their words:

“The reinterpretation of tradition, the understanding of the natural environment and the new ways of understanding viticulture are our working premise”. 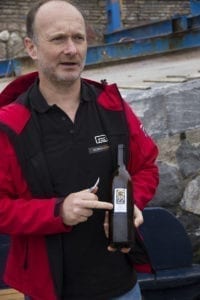 he Bodega Gorka Izagirre, which belongs to the family of the well-known chef Eneko Atxa, is located within the Azurmendi gastronomic complex, a restaurant with three Michelin stars run by the chef Eneko Atxa himself, located in Larrabetzu.

The family winery produces high quality txakoli from local varieties such as Hondarrabi Zuri and Hondarrabi Zerratia in 29 vineyards spread over 9 different municipalities in Bizkaia, where they are committed to integrated winemaking.

In 2019, the txakoli “42 by Eneko Atxa 2015” was chosen as “best white wine in the world” at the renowned Brussels World Wine Competition, one of the most prestigious in the sector.

The Butroi Upategia Winery, formed in 2012, is a winery registered in the Bizkaiko Txakolina Denomination of Origin. Its vineyards are cultivated in Gatika, Zamudio, Lezama and Larrabetzu, as a result of the union of 4 families in the creation of this winery.

The different families belonging to the winery have been making txakoli traditionally for several generations, and despite having scarce means, the tradition was something they did not want to lose.

The creation of this winery had the objective of joining efforts and resources to produce a quality txakoli with a technologically advanced infrastructure. Its txakoli is made from the main varieties of Hondarrabi Zuri, Petit Courbu and Mune Mahatsa.

“The concept we defend is to take care and pamper the land we have inherited from our ancestors to transmit it in the best conditions to our descendants“.

Francisco Uriarte, following in the footsteps of his great-grandparents at the end of the 19th century, makes txakoli at the Eguskitza farmhouse in Fika. Following the tradition of its ancestors with the incorporation of the most modern techniques and opening a window to innovation, the Txakoli Uriarte Winery creates a txakoli with its own personality.

Magalarte Zamudio Winery has a great history behind it. Inherited from parents to children for generations, today they are the 5th and 6th generation of the Aretxabaleta family that produces txakoli in Zamudio.

The family winery has also had the Bizkaiko Txakolina Designation of Origin among its vineyards since 1994. Their great passion for txakoli guides them in the elaboration of a txakoli with a traditional fusion at the same time as avant-garde and innovative.

“Our motivation is to produce the best txakoli in a sustainable way. That is why all our vineyards are under integrated production systems, respecting the environment, the vineyard and the surroundings”.

Zabala Txakolina is a small family winery located in Bakio, in the Elexalde district. This area is known for being the txakoli area of Bakio where you can find many old vineyards surrounding the area.

The winery mainly produces 4 txakolis. Three of them are made from grapes coming only from Bakio, while with the last one, they innovate a little bit more. Like many others, Zabala Txakolina is a winery that maintains traditional Basque architecture but inside it is committed to innovative, mechanised and modern winemaking processes.

Have you been able to decide which winery to visit?

Why give crusoe treasure as a gift?