What is underwater wine treasuring?

What is underwater wine treasuring?

Our wines are designed on land in order to be aged under the sea. We designed them to be TREASURED.

Wines can be aged using countless procedures and there are some vinification processes with excellent results. An example of innovation, which is creating an oenological trend, is the case of underwater wine treasuring, the winemaking process under the Cantabrian Sea coined and started by Crusoe Treasure Winery.

Wine and the sea 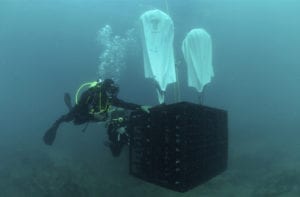 For thousands of years, history has linked the sea and wine. From the earliest voyages, sailors carried foodstuffs for survival and goods for trade on their ships. Many of these foodstuffs were transported in amphorae and all kinds of containers. Wheat, grain, and all kinds of spices later gave way to trade in oil and wine. This practice persisted throughout time and thousands of ships ended their days at the bottom of the ocean. The recovery of these wines submerged in the sea has given rise to all kinds of speculations about their evolution and their oenological, economic, and historical value. 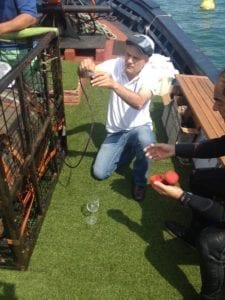 Underwater treasuring is a concept designed and developed by Bodega Crusoe Treasure to describe this special winemaking process and other alcoholic beverages, which has been carried out for more than a decade, originated as a result of the LSEB Plentzia (Underwater Laboratory for the Ageing of Beverages) experimental project. A process, born and improved after years of research, in which we have learned how to design the wine on land, controlling a specific set of parameters, among other factors, to subsequently achieve the maximum evolutionary expression under the sea. Underwater treasuring has a father and reference in the world of oenology: the renowned oenologist Antonio T. Palacios, our wine expert and leading advisor since Crusoe Treasure’s foundation.

Some differentiating factors of our underwater treasuring process in its marine phase, are:

– Temperature. The wines are subjected to small continuous temperature changes. Without exceeding 19 ºC nor falling below 12 ºC. The Cantabrian Sea and the Bay of Plentzia – Gorliz where our winery is based, it’s an ideal location to carry out this process.

– Pressure. The wines are subject to a pressure of 3 bars (3 atm). This causes the partial pressure of oxygen inside the bottle to change and become higher inside than on the outside (yes, it is unbelievable, but true). The tides and the moon play a key role by naturally and continuously modifying the pressure on Crusoe Treasure’s wine bottles. This, together with the lower gravity, gives rise to our unique process. 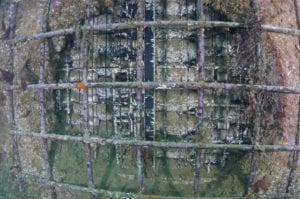 – Movement. The constant rocking of currents, tides and waves of the sea, prevent our underwater wines from resting, but instead, sway and evolve at the constant pace of marine movement.

– Gravity. Any object placed underwater weighs less than on the surface. The same happens with liquids, so the wine is subjected to a greater pressure that positively affects its composition.

– Tides. Every six hours the sea rises or falls up to 4 meters high in our artificial underwater cellar, non-stop and all year round. This constant light changes, movement, pressure, and temperature, offers one of the most extreme biodynamic ecosystems found in nature.

These are some of the factors that determine our underwater “vintages”, but there are certainly more, and we continue learning day by day, not only at sea, but also on land.

The character and traits of each of our wines is affected by the way we treat them on land and the underwater treasuring process undergone in our underwater winery-artificial reef.

We were pioneers, perhaps even a bit reckless at the time, but there is no doubt that the underwater treasuring designed by Crusoe Treasure has become a mainstream method that positively influences the evolution of wine, achieving its maximum evolutionary expression. This has been confirmed by thousands of customers and experts all over the world. At Crusoe Treasure Winery nothing is left to chance, it is a controlled process within an uncontrollable environment, resulting from many years of research and under the guidance of our oenologist Antonio T. Palacios.

Now that you know more, what wine treasured under the sea do you want to taste?