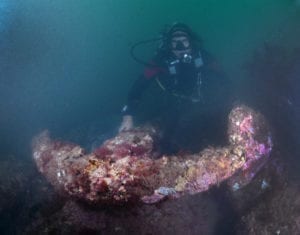 In the depths of the sea we find more than marine life, there are also remains of our history in shipwrecks. Throughout time divers, archaeologists, scientists … they have been diving in the history that lies under the sea. The incredible findings have helped us to understand better our past and our present, also opening new horizons for innovation.

In some wrecks, empty wine amphoras have been recovered, but also some with of them with wine and even also bottles with champagne have appeared inside.

These findings inspired Borja Saracho to investigate whether it was true that beverages aged under the sea could evolve differently from those aged-on land, in a cellar.

The “wine of the Baltic”

One of the most notable encounters was in 2010, when were recovered bottles of Veuve Clicquot Ponsardin, Heidsieck and Juglar (known as Jacquesson since 1832) from a 19th century wreck sunk in the Baltic Sea. Specifically, 168 champagne bottles were found. Some of them were auctioned for a large amount of money, but some samples were left in the hands of a team of scientists led by Philippe Jeandet, professor of food biochemistry at the University of Reims (France), saving them to investigate about their history.

In 2015, the research team published the results of their research in the journal Proceedings of the National Academy of Sciences. 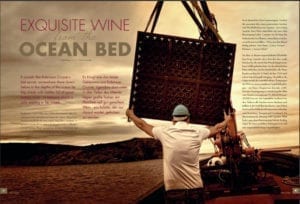 At that time, we were already immersed in the study of the evolution of wine at the bottom of the sea, with the LSEB project (Underwater Laboratory of Aging of Beverages Plentzia) started in 2008, in the Cantabrian Sea, and in the production of commercial underwater wines. Even so, their results surprised us and showed us that our investigations were in the same line as what was found by this reputed team of scientists.

Revealing tastes from the past

According to the study of the University of Reims, focused on discovering our history, the champagne recovered from the seabed was from the vintage 1839, being bottled around 1841, the year in which the ship sank and began its underwater storing until 2010.

The results helped to know the history of the commercial route of champagne in the early nineteenth century and what winemaking processes were in use then.

170 years passed this drink under the sea and, even so, the champagne was still good and retained characteristics similar to a very, very old champagne. 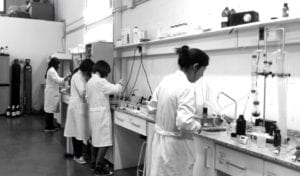 Once the bottles were recovered and identified, their current counterpart champagne was sought and its entire process of elaboration, production and tasting was compared with the underwater witness. Thanks to archeochemistry, multiple analytical tools were combined to characterize the molecular diversity of these wines that had aged under almost perfect conditions at the bottom of the sea.

Some of the recovered bottles lay horizontally, in total darkness (the wreck was about 50 meters deep), at a fairly constant temperature (between 2-4ºC) and in conditions of low salinity.

Furthermore, it was confirmed that the storage in these conditions of these wines under the sea makes the wines retain their healthy properties.

On the other hand, it was surprising to find a higher minerality in the submerged samples. At first it was believed that it was due to the possible entry of seawater into the bottles, but after numerous analyses this option was discarded and it was attributed to the winemaking processes of that time.

The most surprising thing about the “wine of the Baltic” for the scientists was the large amount of sugar that contained, ruling out that it was a Champagne a La Russe (a much sweeter type of champagne). However, the question of how winemakers could achieve such high concentrations of sugar remains a mystery.

The tasting of the “wine of the Baltic” 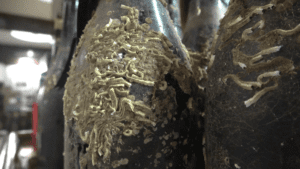 The most awaited moment was the tasting one. Discovering what flavor could have a nearly 200-year-old champagne, which had lain under the sea, without any kind of control, was pleasantly surprised.

At the first moment the wine was described as “reduced“, with “notes of wet hair” (this characteristic is acquired in a wine when it spends a long time protected from any source of oxygen) and “cheesy” (related to wines in which there has been an incomplete malolactic fermentation in the bottle).

In addition, experts noted a slight tingling on the palate, reminiscent of the characteristic bubbles of this drink. Despite the fact that the corks were in good condition, the cork is a porous material and after 170 years, the CO2 inside the bottle was slowly diffusing out of the bottleneck and into the sea.

The most surprising data

By oxygenating this wine in the glass, the aroma became more pleasant, showing aromas of grilled, spicy, smoked along with fruity and floral notes.

This fruity character of the extracted wine samples made this group of scientists think about the good organoleptic conservation of champagne for almost two centuries, which raised the question of whether the marine environment can be a good place for the conservation of wines at long term.

What does this study contribute to Crusoe Treasure?

Reading this paper, helped us see that we were on the right way. Despite the fact that the study was focused at learning more about the history than knowing whether the wine evolves in a different way under the sea, the results revealed some conclusions, which we have already observed.

At Bodega Crusoe Treasure we continue doing research and producing “wines treasured under the sea” (our particular method of making underwater wines), having learned a lot during all these years and knowing what parameters are important in this process and what should be controlled.

These kinds of studies and findings help us to understand more, not just about our history but also about this new method of wine production.

Our wine tourism experiences told through their protagonists

¿What does underwater wine treasuring mean?